Welcome to White Diamond Golden Retrievers in the Heartland!
Hobby breeding in the heart of the nation located in beautiful Oklahoma City. 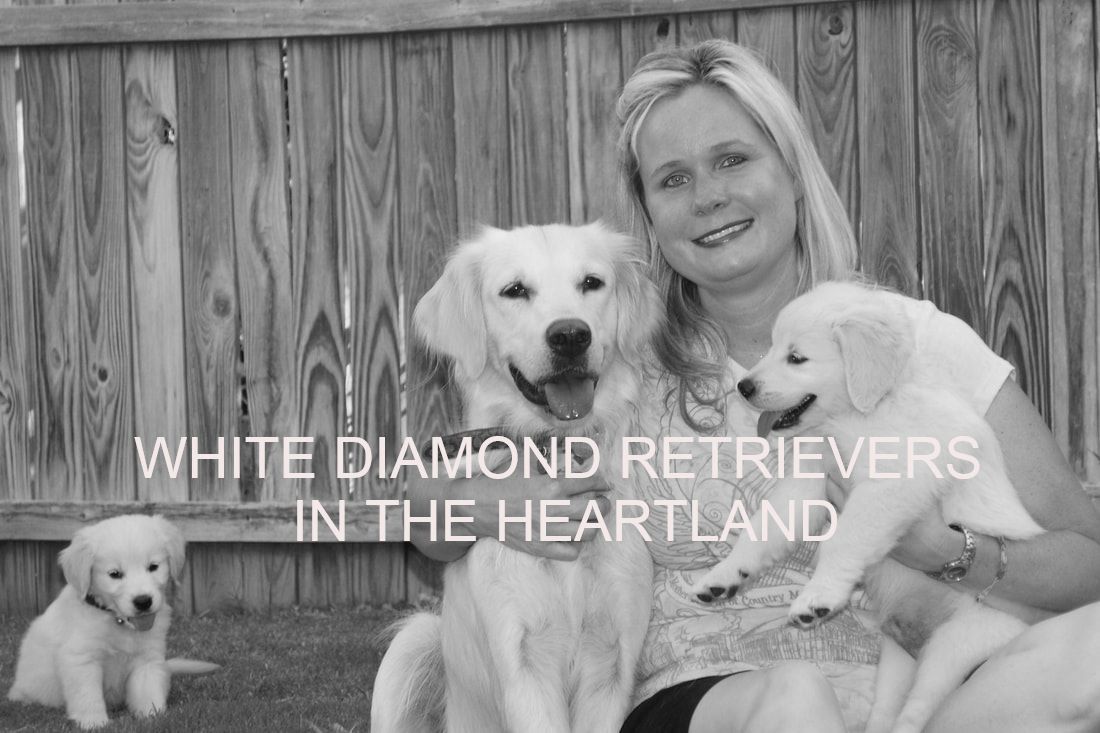 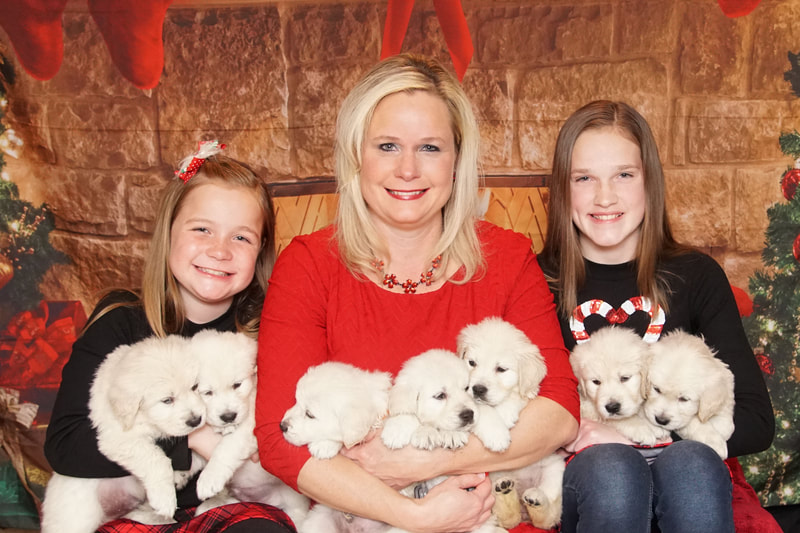 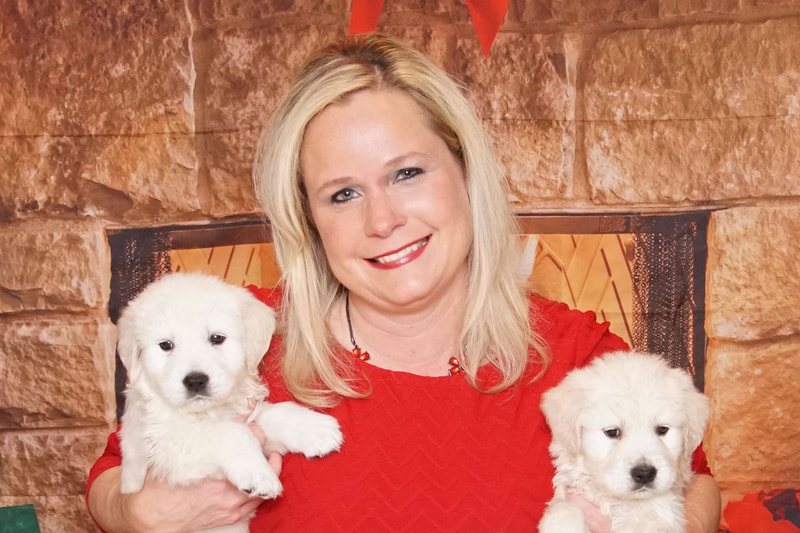 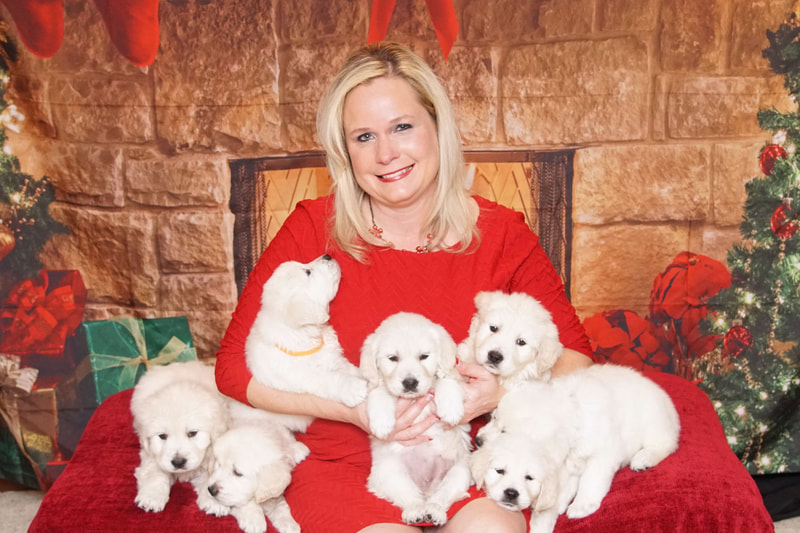 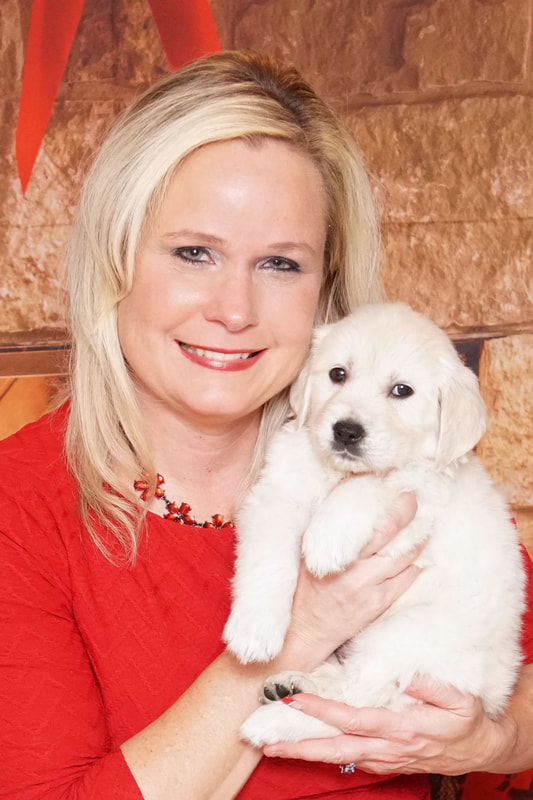 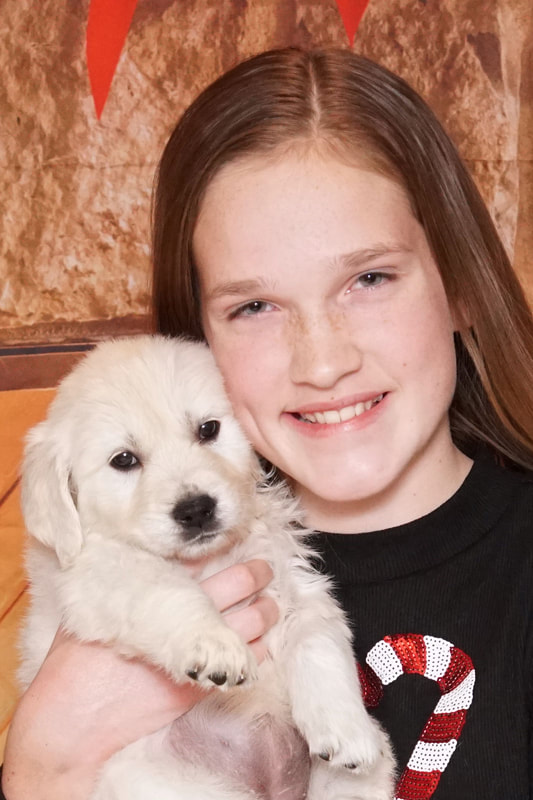 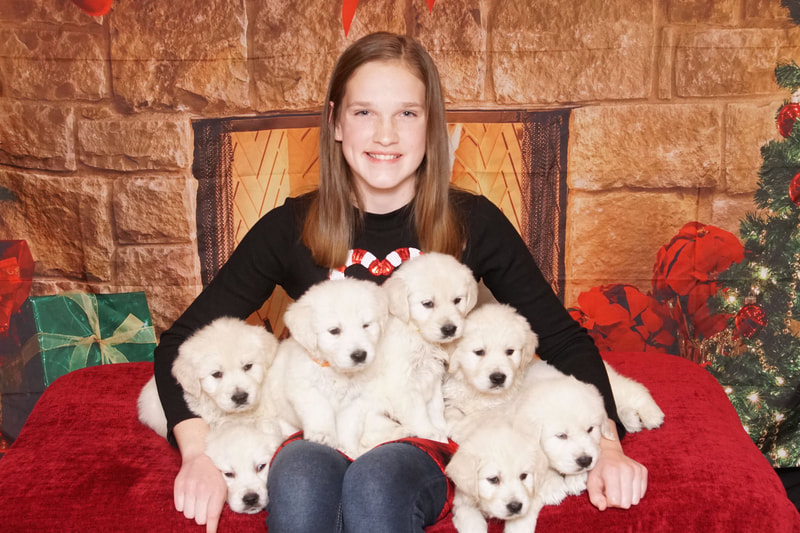 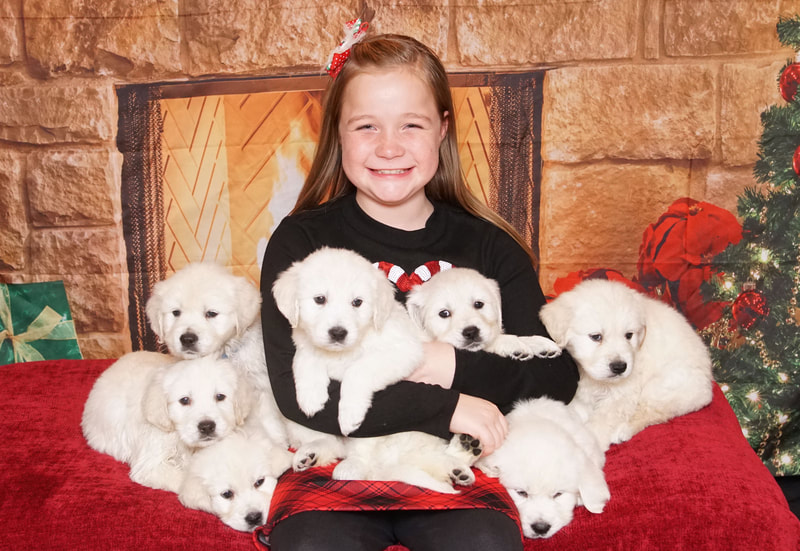 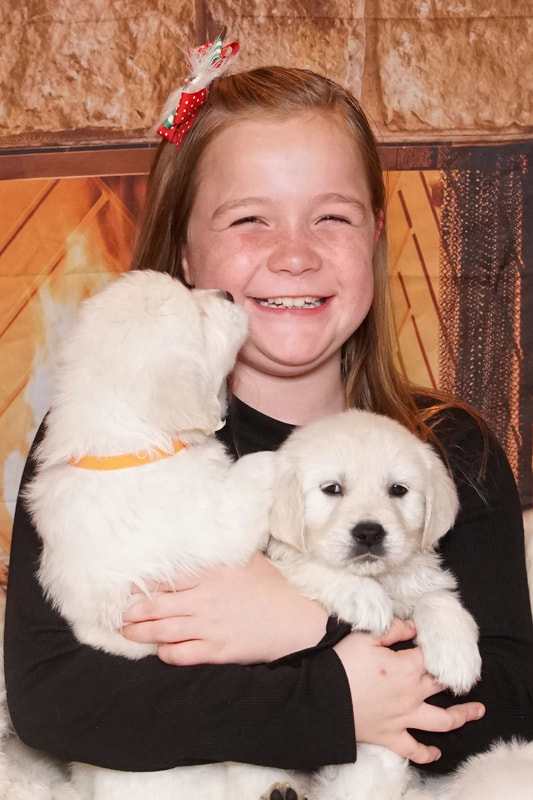 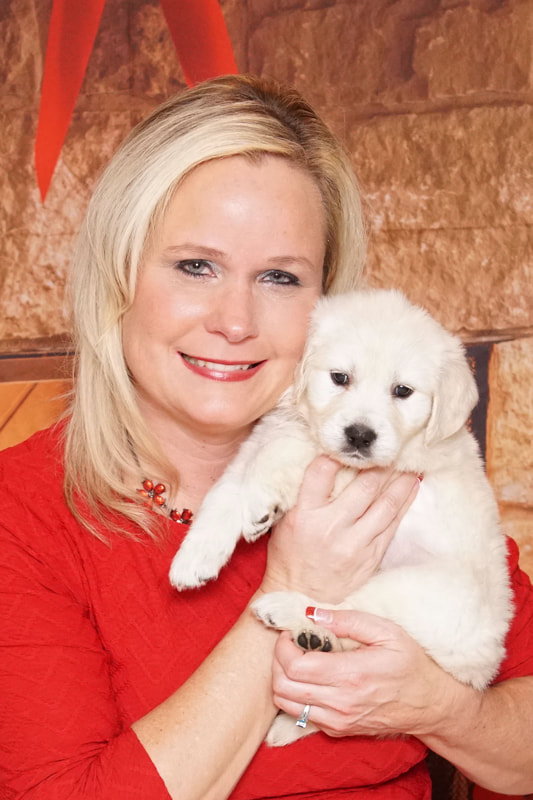 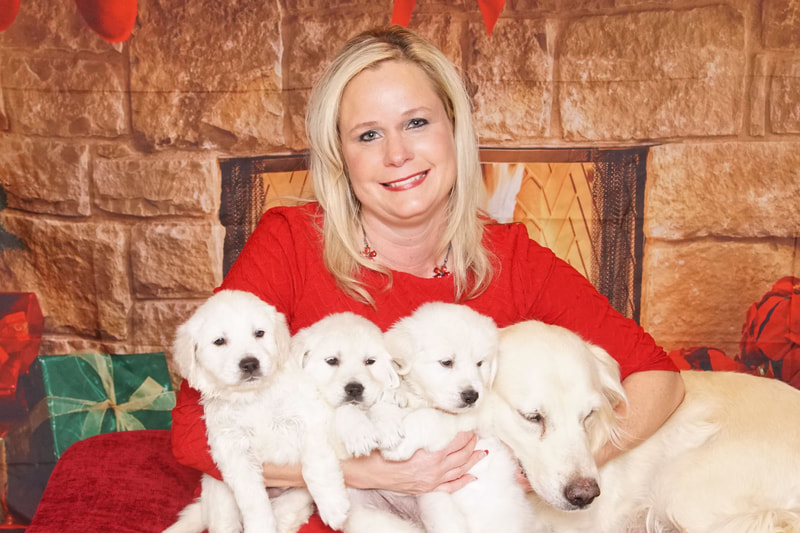 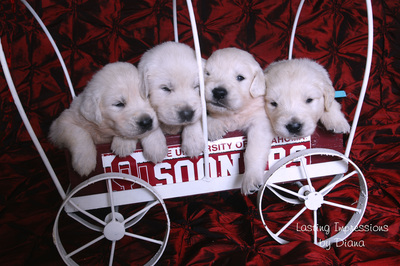 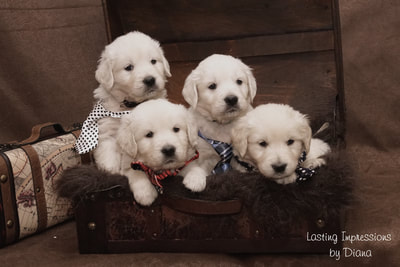 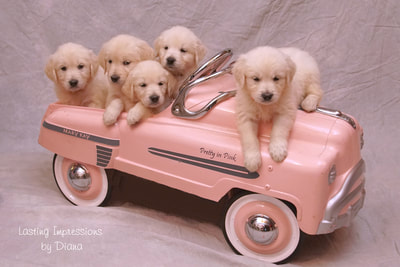 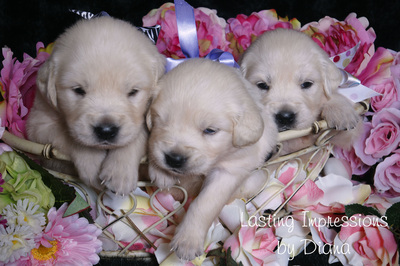 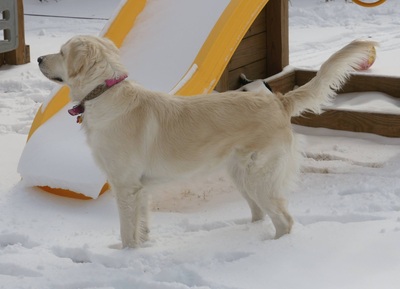 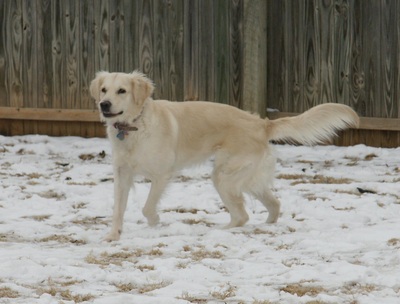 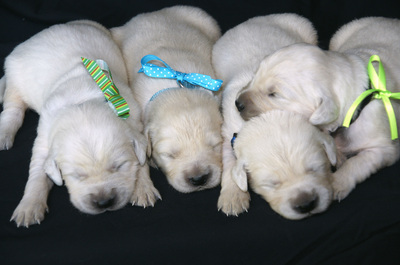 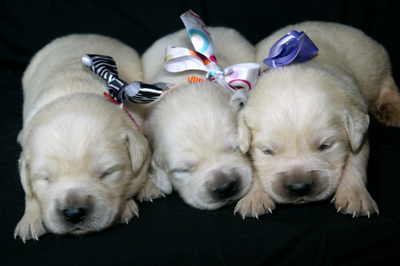 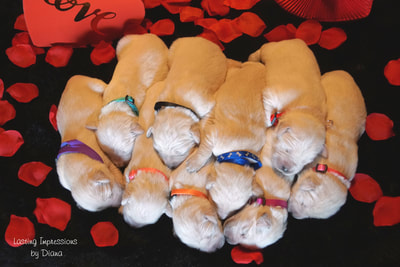 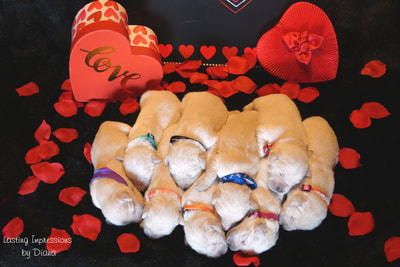 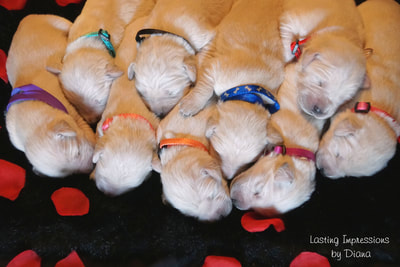 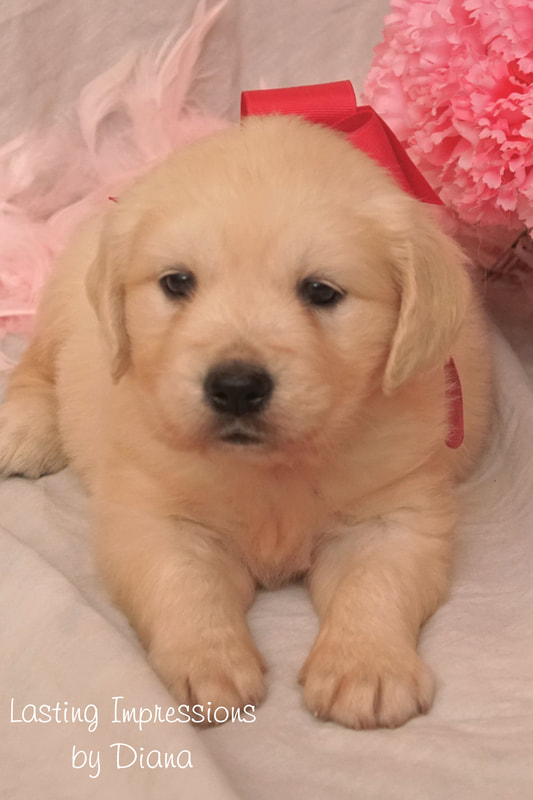 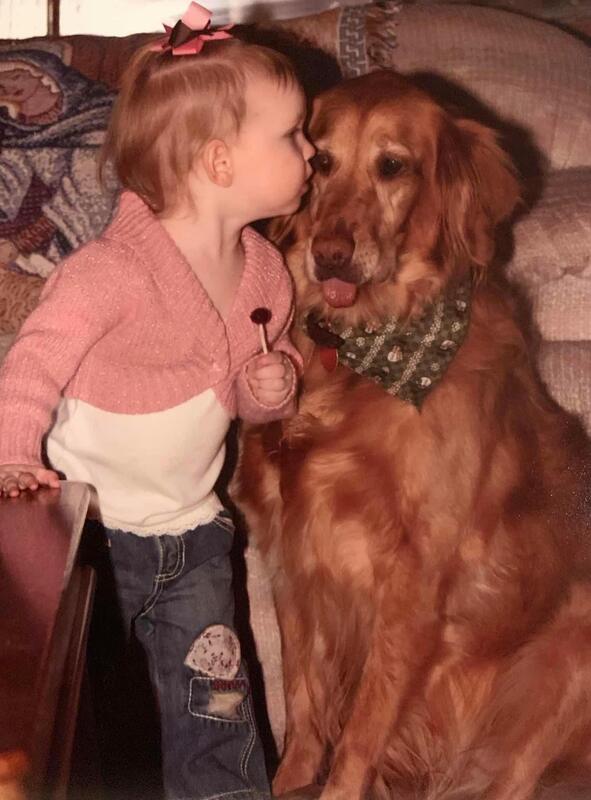 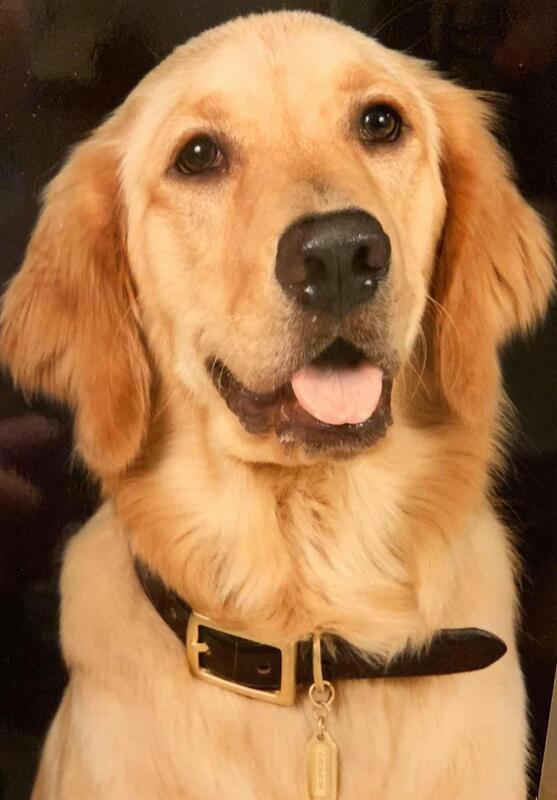 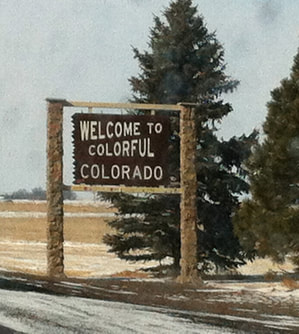 Why English Golden Retrievers?  In January 2012, we lost our American Golden Brinkley after 13 wonderful years.  The girls wanted another dog as sweet and gentle as Brinkley.  Diana's search for the perfect dog led her to the discovery of the beautiful English Cream Golden Retrievers.  After weeks of searching, we packed up and headed for Colorado to find our "Diamond in the Rockies".  Of course, we didn't watch the weather before travel and found ourselves stuck in a blizzard, but we didn't turn back until we had our precious Marlee!  It is truly amazing how her personality is exactly like our former Brinkley's.  Diana was always saddened she didn't bred Brinkley years ago as she was an amazing dog. Diana has been a nurse since 1995 and worked in the rehabilitation of patients who where injured etc.   During her years of work, her love for therapy dogs emerged and she discovered there were no retrievers in Oklahoma when looking for retrievers.  She had to go out of state to get Marlee.  It was then decided to bred Marlee so Oklahomans would have some of these wonderful dogs in our state! The heartland of the United States!   So, here we are.....our adventure begins!

Yellow or Golden
Retrievers became popular in England toward the end of the 19th century, and they were first shown in England (listed as Golden Flat-Coats) in 1908. In 1913 they obtained separate status when the Golden Retriever Club (of England) formed, and the breed arrived in North America in the 1920's. The first Golden was registered by the AKC in 1925, and the breed flourished in the 1930's and '40s. Used predominantly as hunters, Goldens proved strong in the show ring also, although unlike today, the darker gold colors were initially favored over the light. Over the years, the Golden Retriever has grown to become one of the most successful, recognizable, and popular breeds in history in all areas.

The Golden Retriever, with its intelligence and eager to please attitude, is one of the most popular breeds in the United States according to AKC® registration statistics. The working ability that has made the Golden Retriever such a useful hunting companion also make him an ideal guide, assistance and search and rescue dog. The golden-colored coat is the hallmark of this versatile breed, and can range from light to dark gold.

This active and energetic Sporting breed can adapt to many different living situations but requires daily exercise. His water-repellant double-coat sheds seasonally and needs regular brushing. With his friendly temperament and striking golden color, this breed is both beautiful to look at and a joy to own.

Size, Proportion, Substance
Males
23-24 inches in height at withers; females 21½ - 22½ inches. Dogs up to one inch above or below standard size should be proportionately penalized. Deviation in height of more than one inch from the standard shall disqualify. Length from breastbone to point of buttocks slightly greater than height at withers in ratio of 12:11. Weight for dogs 65-75 pounds; bitches 55-65 pounds.

Coat
Dense and water-repellent with good undercoat. Outer coat firm and resilient, neither coarse nor silky, lying close to body; may be straight or wavy. Untrimmed natural ruff; moderate feathering on back of forelegs and on underbody; heavier feathering on front of neck, back of
thighs and underside of tail. Coat on head, paws, and front of legs is short and even. Excessive length, open coats, and limp, soft coats are very undesirable. Feet may be trimmed and stray hairs neatened, but the natural appearance of coat or outline should not be altered by cutting or clipping.

Color
Rich, lustrous golden of various shades. Feathering may be lighter than rest of coat. With the exception of graying or whitening of face or body due to age, any white marking, other than a few white hairs on the chest, should be penalized according to its extent. Allowable light shadings are not to be confused with white markings. Predominant body color which is either extremely pale or extremely dark is undesirable. Some latitude should be given to the light puppy whose coloring shows promise of deepening with maturity. Any noticeable area of black or other off-color hair is a serious fault.

Temperament
Friendly,
reliable, and trustworthy. Quarrelsomeness or hostility towards other dogs or
people in normal situations, or an unwarranted show of timidity or nervousness,
is not in keeping with Golden Retriever character. Such actions should be
penalized according to their significance.